WordPress has been the best content writing service and management system for several years. Many of the world’s biggest websites were built using this revolutionary software, including The New Yorker and The New York Times. Even Beyonce and the country of Sweden use WordPress to power their web presence. Here are 9 interesting statistics about WordPress for 2019.

1. The website Who is Hosting This reports that an incredible 27% of the internet is powered by WordPress. That means that more than one out of four websites are built with the platform. This statistic is based on survey results from Netcraft. How many websites are using WordPress? The estimated number is a whopping 75,000,000 sites. About half of these are hosted on wordpress.com while the rest are self-hosted WordPress sites. The number of sites powered by WordPress is likely to continue to grow. Over the last five years, WordPress has seen their market share rise from 13.1% to 27.2%.

3. Tyton Media reports that there are 72 translations of WordPress but that 71% of WordPress.com sites are in English. CodeInWP reports that non-English WordPress downloads began to surpass English downloads in 2014, so English will likely not be dominating the WordPress landscape for too much longer. In India, 47% of sites using a CMS are using WordPress. According to wordpress.com, 4.7% of WordPress sites are in Spanish, 2.4% are in Indonesian, 2.3% are in Brazilian Portuguese, 1.5% are in French, 1.3% are in Russian, 1.2% are in Russian, and 1% are in Italian. Regardless of the language, there are a lot of words on WordPress sites. According to Who is Hosting This, there were an astonished 117,939,148,357 words written on WordPress sites in 2016 alone.

5. As for plugins, there are over 50,000 of them. According to Torque, the spam-reducing plugin Akismet is still the most downloaded plugin with over 52 million downloads. Akismet has blocked more than 80 billion spam comments and prevented 23 billion brute force attacks. Contact Form 7 comes in second place with over 40 million downloads. Yoast SEO rounds out the top three WordPress plugins with over 30 million downloads. There have been over 1 billion downloads of plugins from the wordpress.org plugin directory.

7. There are a lot of websites built with WordPress, but how popular are these sites overall? Tyton Media describes that as of January 2017, over 409 million people view over 24 billion pages each month. These statistics are based on reporting from cminds.com. WordPress websites get a lot of views but they also get a lot of comments. Codeinwp.com reports that there are 49.9 million new comments on WordPress sites each month.

8. WordPress experts have found a serious income stream from the platform. On ThemeForest, 7% of WordPress themes for sale bring in at least $7,500 in a month and 25% make at least $2,500 in a month. WordPress developers charge an average of $50 per hour with a range of $30-200+ per hour. These numbers are all from Envato’s reports as detailed on codeinwp.com. Tyton Media reports that developers of custom WordPress themes charge between $1,000 and $15,000, based on data from ManageWP. There are plenty of jobs related to WordPress. There are only around 500 employees at WordPress headquarters, but there are plenty of independent developers, designers, tech specialists, content management professionals, social media marketers, and other jobs that fully rely on WordPress. Many people have specialized in WordPress, including people who started out as traditional web designers using HTML and CSS.

One big change coming down the pike in 2017 is WordPress will require that all WordPress sites use SSL encryption starting this year. It’s hard to say if this will cause any significant number of users to leave the platform. Requiring extra security will help their reputation overall since they have had a few security threats and loopholes over the years. Although they have always been fast and responsive when a security threat is discovered, there are certainly some users who have shied away from using WordPress because of this. The SSL requirement might help.

There’s no question that WordPress has transformed the internet for the better. The platform offers unprecedented freedom and flexibility along with proven performance. Will we continue to see the WordPress usage statistics rise? All signs point to yes, at least in the near-term future. You never know what new CMS might be around the corner but it will have to be pretty good to even have a chance of taking WordPress down a notch. These WordPress statistics of 2017 make clear that WordPress is here to stay. 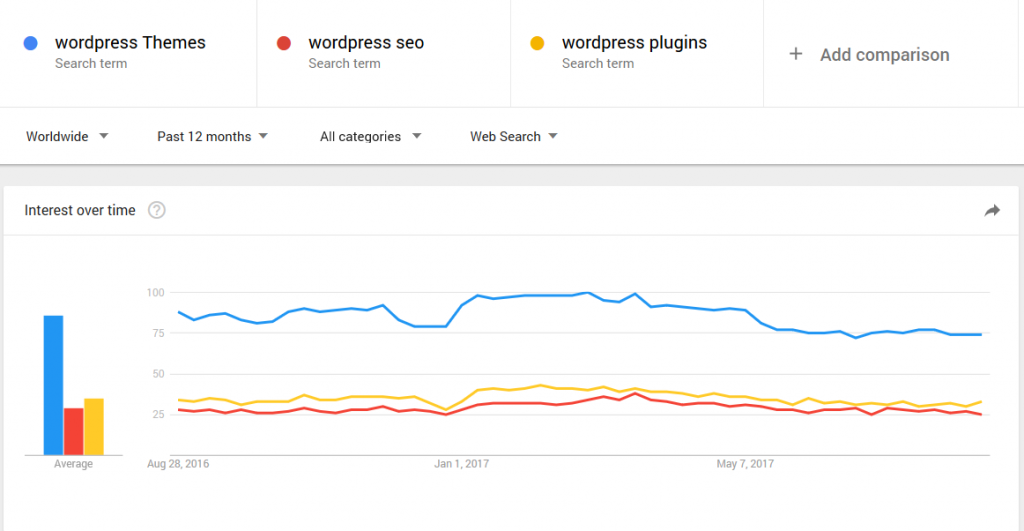